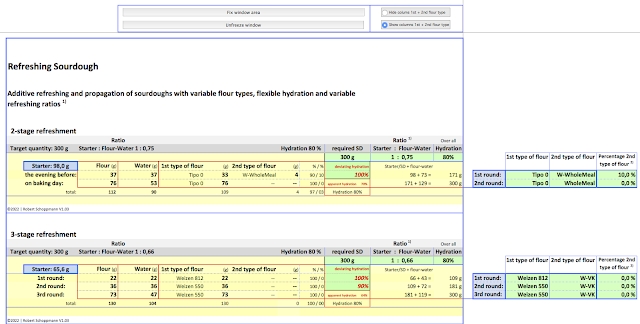 More leavening force and flexibility is not possible !

The "Additive Refreshing of Sourdoughs".

A small Excel module that has it all and invites experimentation when refreshing sourdough and, on top of that, avoids annoying sourdough residues.

I don't even want to think about how often I have been annoyed by sourdough residues that necessarily occur during a "selective" sourdough refreshing. In this context, "selective" means that in a multi-stage sourdough refreshment after the first stage, only a partial quantity of the respective sourdough mixture is used for the next stage and the remainder that accumulates with each new stage must be "disposed of".

Of course, you can find many recipes on the Internet that are supposed to make sensible use of leftover sourdough. However, I do not bake sourdough crispbread or pancakes etc. every day.

When I tried a few months ago to prepare a levain liquide, that is, a liquid sourdough, I followed the procedure as presented by Éric Kayser in "The Book of Bread" on page 24 and 25. Over 20, 40, 80 and 100 g flour and water I had a very active Levain liquide on the fourth day.

With this, the idea of "Additive Refreshing of Sourdoughs" was born. Only a certain amount of flour-water is ever added to the existing sourdough. My Levain liquide reacted to the additions so violently that its volume at 28 ° C (82° F) in less than 1 hour had already doubled and in 90 minutes already tripled. Now my interest was aroused !

In order to produce now for a certain recipe a target quantity of extremely active Levain liquide with 100% hydration or also a Lievito Madre with 40% or 60% hydration, I had the idea to combine these different parameters in a small Excel module and to provide for up to 5 stages for the refreshment depending upon need. In addition, it should still be possible to add a 2nd type of flour (mostly wholemeal flour) proportionally in each stage and even still individually adjust the hydration of the respective stage without changing the intended total hydration. And finally, the refreshing ratio, i.e. the ratio between starter on the one hand and the flour-water quantity on the other, should also be freely selectable.

That was quite a challenge !

In my resulting Excel module, entries are only possible in the green highlighted fields. The 2nd flour type can be entered with different proportions for each stage, such as for wholemeal flour proportions. Separators for thousands and decimals are automatically displayed by Excel in the usual way, e.g. 1,000.50, even if the screenshots show the German version. 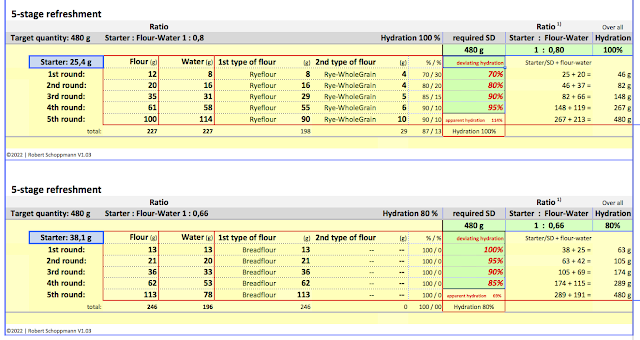 I have chosen the target quantity of 480 g in the 5-stage refresh only for demomnstration purposes.

A shortened view without display of the 2nd flour type and with increasing hydration in each stage looks like this:

The total hydration selected here is 60%. Since I usually run my Lievito Madre with 60% hydration, I have shown here once the possibility to "tune" in 4 rounds from (usually) 100% hydration to 60% hydration. This is not mandatory in this form, but so I drive my sourdough to peak performance and accustom the microbes gradually to the changed conditions, without "disturbing" the milieu in the "hair-pull procedure" sustainable! Also the refreshment ratio between starter on the one hand and the flour-water quantity on the other hand can be freely determined in this module.

If you do not want to use your sourdough for a panettone, a 2- or 3-stage freshening is usually sufficient. 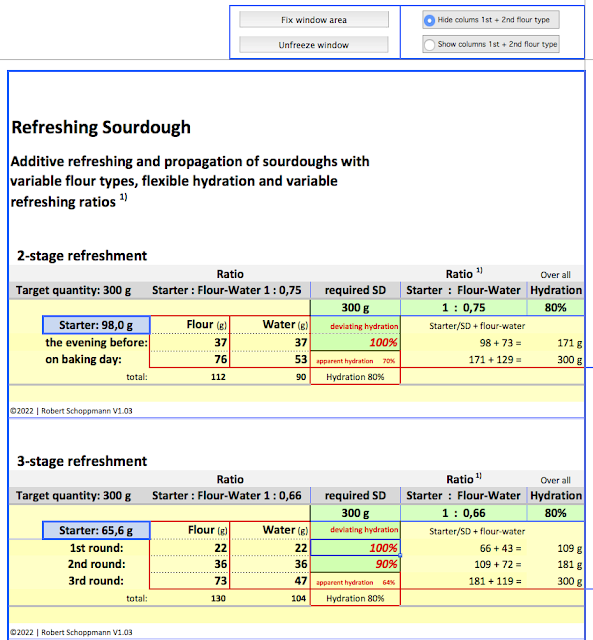 I have included small macros that can be used to quickly adapt the view to the respective requirements.

After I had finished this Excel module, I found by chance in the "Brotbackbuch Nr. 4" by Lutz Geißler on page 268 a graphic with the title "Schematic representation of the rising quality depending on the refreshing tactics", which fully confirms my observations on the "Additive Refreshing" in curve No. 2.

Now I can finally produce - even over several stages - the quantity of sourdough that my recipe requires without any leftovers. Quite incidentally, I bring my sourdough to absolute peak performance through the respective "supplementary feeding".

Now I certainly no longer have to add "fear yeast" to the bread dough !